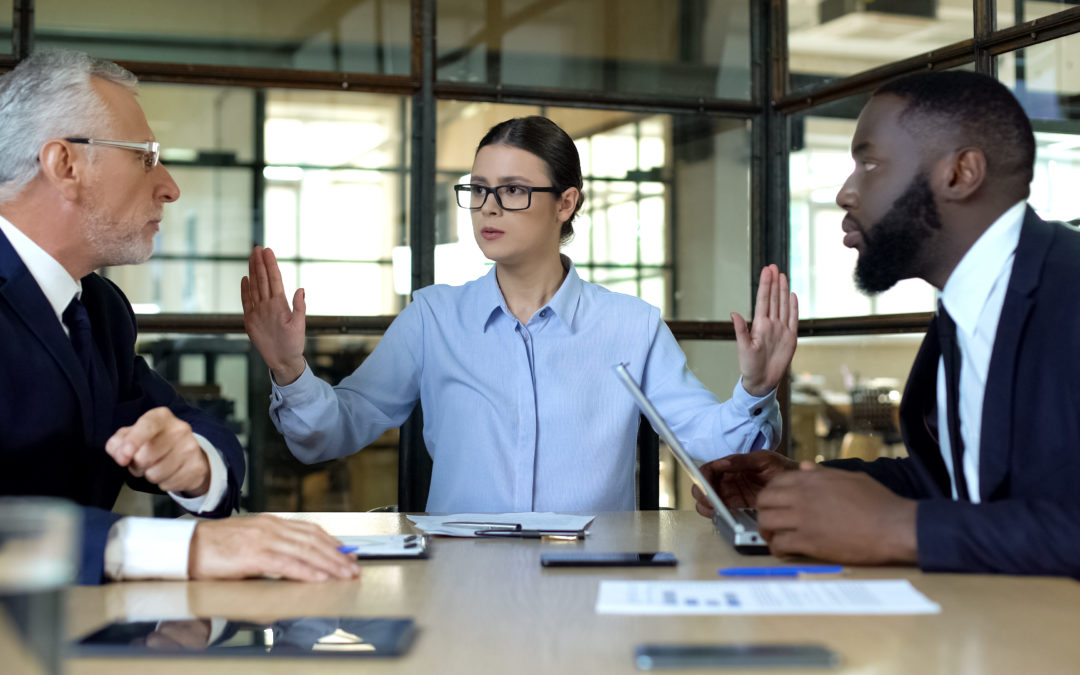 When you hear the word “conflict”, what image does it conjure for you? Do you see people arguing or even fighting, each trying to win? Do you see someone running away and avoiding an uncomfortable situation? Or perhaps you see two or more people keeping their eyes on a desired outcome and working towards an acceptable way to meet the desired outcome.

Many people associate conflict with problems and view it in a negative connotation or something to avoid. However, conflict is based upon individual beliefs and caring about an issue or situation. Conflict is neither good nor bad but it can be constructive or destructive, depending on how it is handled.

We see many organizational managers who are uncomfortable with conflict, have adopted a single style of handling conflict, or are not aware of the other possible options. Frequently leaders avoid conflicts, which later cause greater problems. Other leaders adapt a power-oriented approach, positioning themselves as a “bully” to be feared. While both of these default methods may provide the leader short-term comfort, they likely do not contribute to the productive, positive growth of an organization.

Conflict is inevitable when interacting with others, especially in a work environment. Conflicts are organizationally destructive when they delay a solution unreasonably, become personal, create turmoil, or affect organizational productivity. A productive work conflict results when the conflict leads to a solution that is better and more innovative than a single individual could have created.

Have you ever noticed how you tend to handle conflict and wondered why your conflicts are typically productive or typically destructive? The Thomas-Kilmann Conflict Mode Instrument, a leader in conflict resolution assessment for more than 30 years, describes five conflict-handling modes, based on the level of assertiveness and cooperativeness.

• Avoiding is unassertive and uncooperative; the person simply does not address the conflict. Some conflicts are insignificant so that avoiding is the appropriate response (we do have to pick our battles), but excessive avoidance reflects detachment and lack of engagement – not traits desired in a leader. Often the leader / manager avoids a conflict because they want to be seen as “nice” and/or don’t want to be seen as “the bad guy”. The members of the organization are looking for leadership from their leaders, so managers who avoid conflict or even difficult situations are dangerous to an organization as the result is like a ship without a rudder.

• Competing is assertive and uncooperative. There are times when a leader must “pull rank” and make command decisions. However, if this is one’s default mode of operation, the growth and health of the organization will suffer. When competing is the standard mode of operation for a leader or manager, this becomes destructive to the organization. This power-oriented mode when used to excess occurs when one is more concerned about winning individually rather than the team winning.

There are times when avoiding and/or competing are appropriate conflict-resolution modes, however other styles that should become part of one’s tool-box including collaborating, compromising and accommodating.

• Collaborating is assertive and cooperative. Have you noticed a time when you and/or your colleagues have gone into a situation with differing desired approaches, but have been able to work together to achieve a common organizational goal? When collaborating, the parties are looking for a solution that benefits the organization, even if it means that no one person is going to get everything they want. A collaborative conflict resolution is not easy and often involves strong beliefs and opinions. Collaborative conflict resolution is often organizationally productive and employees who work collaboratively are generally mature and self confidant.

• Compromising is “in the middle” of both assertiveness and cooperativeness. One example of compromising is when multiple departments have to give and take when there is limited budget available. By working together, each division is able to make some sacrifices that are for the good of the organization as a whole. When compromising, all parties give up something. Each party may give up more or less than another person but each believes the solution is productive.

• Accommodating is unassertive and cooperative. This is where one person relinquishes their desires to the other. While accommodating has its place, excessive accommodating is often reflective of a weak manager and probably indicates limited leadership. Accommodating rarely leads to an optimal solution for the organization because there is no over-arching goal other than making the participants happy.

Just as conflict in and of itself is neither good nor bad, each of the five modes is useful in some situations. What is important is that you, as a manager and hopefully a leader, recognize which is your “default mode”, and when and how to use it as well as each of the different modes.

As a wise woman once said, “If you have five people in a room and all are in agreement, you have four too many.”

Let us hear from you – When you hear the word “conflict”, what image does it conjure for you? What are some effective ways that you handle conflict?